Not the First Time {But the Most Fun}

Tuesday was a weird day for me.  I probably cant say I’ve had a day like that before.
It was ‘weird’ in a good way.
A great way, you guys.
My day started off with a morning almost completely to myself.  I woke up a little later than usual – the girls were still sleeping and I contemplated rolling over and going back to sleep, but ultimately decided to get in a quick shower before they woke and demanded out of their cribs.
I had a big day ahead.
I showered, shaved my legs, washed and blow dried my hair, made myself some coffee, dumped it all over my bathroom rug, remade said dumped coffee..
enjoyed a cup of yogurt and a few berries..
answered a couple work emails..
Those little birds snoozed through it all.  When does that happen?
Never.
They woke with just enough time to get dressed, have some milk and take their dry cereal breakfast to go!  It was off to grandmother’s house for the day – but not before I attempted a few pictures on the porch before we left.  They turn 18 months this week (and I might cry..) and I like to snap a couple for the blog (and their year book) and these were a fail.  Jolie was mid-tantrum, and if you look close enough you can see Parker’s green snot.
We are all still sick.  Boo! After I dropped the girls off with their BB and Papa, I was totally lost with an empty house!  I hardly knee what to do with myself.
‘mama bear’ tank / loved by hannah and eli 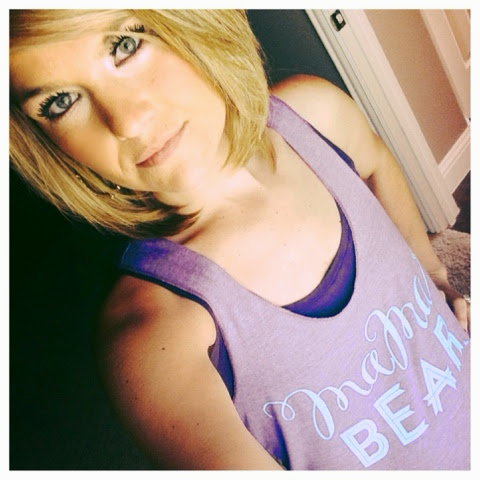 This mild panic of ‘nothing to do’ was short lived.. rehearsals for my hot spot on The Hallmark Channel’s Home & Family Show were about to start!
Yep..this awesome show.
And these beautiful people were their, too!  Mark Steines and Cristina Ferrare are the hosts of this super fun and laid back show (my mother in law watches often and she turned me onto it recently)
The producers got wind of my most recent published recipe (June/July issue of Taste of Home Magazine) and wanted to feature it on their regular cooking segment Cristina Cooks! I was invited to Skype on the air as she made it.  UM.. hello!?  Yes!
I was so pleased with how the taping and air of the show turned out.  My very first live television appearance was on CBS News about Halloween and candy consumption.  I got a call at 3:30pm for me to be prepped and ready to go live at 5pm.
Oh, by the way, here are potential talking points.  See you at 4:15p.
I was a complete mess.  Lost my words a couple times. Thankfully it wasn’t bad enough for them to never call me back again.. I was on the next month talking about immunity and food for the coming flu season.
ANYWAY- this time was so much fun.. and I was wearing yoga tights and leopard print ankle socks. You can see the full recap on the Hallmark Channel website HERE Jordan made sure to point out that he made national television as well.
Cannot forget those two little ladies (that stole the show in its entirety) It was such a great day! I am honored to be apart of a really fun group of people at the Home & Family Show. Even if it was for just about 10 minutes.
..or six.
Everyone gets their ten 6 solid minutes of fame at some point..right? 6 Comments on Not the First Time {But the Most Fun}